Glaz’art is a unique venue in Paris. Of course there’s art gracing the walls, but atypically these are pieces you can actually purchase instead of look at. Granted, they’re out of my price range by…miles…it gives the place authenticity. Other than the fantastical ceiling lights, or globes of bubbling water akin to a luminous fish bowl, the place is small reminiscent of say, the Empty Bottle in Chicago or Mad Planet in Milwaukee with a dose of cleanliness. The only odd point of the evening was the rather intrusive camera crew quartet. Sorry, but you guys have to move around once in a while; and when the artist tries to get close to the crowd, don’t raise the camera to their face-level to “get a shot.” It’s highly disrespectful of ticket holders. (Had to clear the air first.) 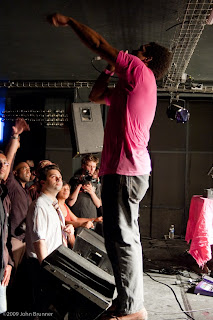 I went into it with this future actual conversation in mind. I know the French will have trouble following Los Angeles’ Busdriver. Why? It’s Busdriver. As a native English speaker, I can only follow him for a little bit before I become that lost child in the noisy Wal-Mart waiting for the speakers to call me back to clarity. Does it bother me? Nope. He’s the Ani Difranco of lyrical quickness. On stage his talent only becomes real, like the first time visiting a foreign city and seeing those postcard images come to life. The predominantly French audience had a glazed look, enjoying the slung syllabic sounds coming out of his mouth at an superhuman speed.

Busdriver’s performance predominately featured a greatest hits of the past years, peppered with a few new tracks off his upcoming album, Jhelli Bean. Far more improvised than a typical hip hop performance, he swung through Gun Control and The Troglodyte Wins to the cheers and claps as he sped up. Without fail the faster he went, the more they cheered. One of the last morceaux of the night was the recently released Me – Time (With The Pulmonary Palimpsets), a classical piano soon-to-be-classic where Busdriver seems to challenge the piano instrumentals to a speed and clarity contest. It’s hand-in-hand with the flute in Imaginary Places, which was the other bookend of the evening.

He never slowed down, not even for the fact that the audience was frankly French. The public didn’t care. They were entranced and enthralled by the rap spectacle. Even with a bit of envy, perhaps, at his English ability. Coming from the States, seeing such a speedy lyrical delivery would make anyone jealous, even native speakers.

What was the most impressive aspect all in all? After he left the stage, the audience cheered the loudest they had during the entire night-and did not stop even as they began taking apart his equipment. Knowing a master of the arts was in their midst, it echoed between the artwork before the stereo ended the evening. Look for Jhelli Beam to hit the shelves June 9th via Anti-.