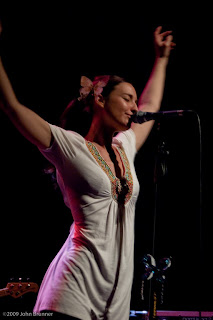 Talk about fresh new talent. The up-and-coming sweet chanteuse, Charlie, performed her first big headlining concert in a packed Café de la Danse in Paris. Selling out about 300 places is remarkable without having an album nor single for sale yet (her debut will be released June 8th). Regardless, you would not have known that this was the Lyon-based singer’s big headlining debut, handling the salle with confidence and grace last night of a more established singer.

Opening was the highly entertaining musician, Barcella. Seizing the stage with a methodological manner, the set was half concert, half theater performance. Self-described as cabaret, among other styles including slam (akin to our rap battles, but more poetic) and hip hop, Barcella remarked he was invited by Charlie to ‘warm up the audience’. He thoroughly surpassed this, tugging the public like puppets to keep our attention with witty poems, anecdotes, and a (among others) captivatingly hilarious song dealing with, of all things, suicide. You can view an excellent example of his performance style here: Le Suicide (YouTube)

With a handful of songs publicly available, three of which having received the video treatment, Charlie’s set was a showcase of what’s to come from the emerging elegant singer. She performs pop music à la the French style, akin to Olivia Ruiz more than her contemporaries; who adopt a traditional, more ‘American’ pop. Her voice is similar to Olivia’s (especially as on her new single, Elle Panique) with a lighter-than-air, sweet tone. Yet closer to home, one can’t help but evoke a more youthful-sounding Sara Bareilles sans personally piano playing (there seems to be a physical resemblance as well).

Capped with a three song encore, Charlie’s music floated much like the butterfly adorning her hair (the same as she’s often seen with) throughout the audience on the stairs and in the balcony. The songs stayed within pop, influenced so often by folk twangs before giving in to a rock guitar which never overwhelmed her singing. Throughout she was accompanied by perfectly balanced piano parts, framing her lovelorn lyrics as on her first single, Le Sapin. During the single’s chorus, she calls out to a lover who parted ways asking, “When will we remember?” while looking at a Christmas tree (un sapinwith not a gift underneath. Though one came early when Mauss, who gave Charlie a big boost, came out to perform their pop-rock duet Je Recherche (I’m Looking) (YouTube). 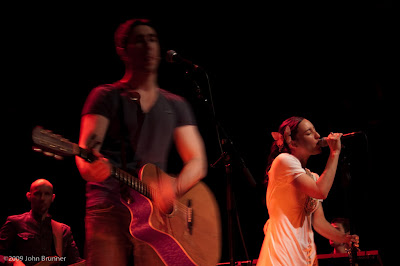 With the enthusiastic applause her audience gave last night in Paris, Charlie is building up towards an unforgettable summer once her album is released via at(h)ome. The Lyonnaise butterfly proved Tuesday night that she has wings to carry her far among the blooming fields of today’s rising French artists.

Written By
John
More from John
Donate for Chi Cheng: One Love for Chi Trauma has a peculiar...
Read More