With Earth Day wrapped up weeks earlier and environmentalism on the mind, the concept around Iron Maiden‘s Somewhere Back in Time World Tour could shock some. Decked out in their own Boeing 757 dubbed ‘Ed Force One’, the band embarked on a global tour stopping both at familiar and far away locations supporting the release of Live After Death. Iron Maiden: Flight 666 is a documentary produced by Toronto-based Banger Productions, tagging along with the group throughout the tour; mixing together performances and off-day excursions.

The documentary balances the music and the organization by showing a song before launching into the lull between the storms of concerts. Shown on the right screen, the feeling of actually being against the fence exists. The documentary is shot in HD with crystal clear images of Adrian Smith and Steve Harris coupled with Bruce Dickinson’s enthusiasm (i.e., on Revelations) both drawing in the audience. The sound is faithful to concerts of this scale; transforming the cinema’s speaker system into massive amplifiers. For once, you feel the true grandeur of these stadiums and venues to the point you can see the heat emitting from the raised lighters.

What makes the documentary are the ‘filler’ in the form of off-days or the logistics involved in an ambitious tour as this. The life of rock stars fascinates all, though the lavishness has diminished or has been tilted towards pop and hip hop artists today. Flight 666 gives a brief glimpse into Iron Maiden’s life on tour, particularly after becoming established and world-renown. On Day 9, the band splits off into their own unorthodox relaxation modes; tennis with the Wimbleton champ Paul Cash and hitting the green with Adrian. As the tour evolves, crew and roadies are discussed and displayed just as the band’s family members that are along for the voyage. The director does an excellent job ensuring a balance between antics and down-to-earth reality during these segments. 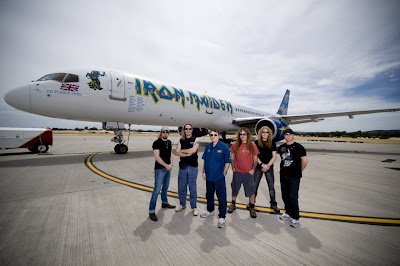 A question sure to land the documentary back to earth will be whether or not the use of a Boeing 757 to tour is excessive, environmentally-unfriendly or is justified. The group cites a decision to travel by plane due to the costly nature of organizing a traditional world tour, particularly to far-flung locales such as Peru or Costa Rica, from an accounting viewpoint. Clocking over 70,000 km, environmentalists could be justified. However once you see the faces of the audience, many of whom never expected such a concert would be played in their country, their arguments start to lose some merit. How could you deny it after seeing the end of the Columbia footage, or the throngs of people in Costa Rican streets yelling football chants to Iron Maiden? Over time the positives outweigh the negative consequences as people incredulously express their surprise over the legendary British band’s appearance.

Viewers won’t succumb to the jet lag, nor the water jets spraying over the unbelievable crowds of South America. While they come short in truly emphasizing the logistical challenges of the tour, directors Scot McFadyen and Sam Dunn create a comprehensive vision of the ambitious world tour without becoming overwhelming or tiring. The metal band comes across as humorous as they globe trot, performing before astonishingly grateful audiences that bestow upon them a certain humanitarian aspect. Regardless of your environmental opinion, or even if you don’t listen to the band, the documentary is unique in depicting an established band achieving a global goal.

Written By
John
More from John
Sweden’s own Miike Snow is returning to Chicago, following their performance at...
Read More