The end of March brought, to Paris, the end of the real winter cold, Ben Lee, and unfortunately closed the curtain of La Flèche d’Or. La Flèche d’Or was a venue that closed a few days ago, an anguished moment both for Parisians and mes amis who discovered it during our stay in Paris. It’s a small, intimate venue that is always packed, serving both cheap(ish) drinks and providing globally renown music acts often for only 5€/gig. It was an old train station, of which you can still see the tracks from the glass-enclosed restaurant in back. The stage, outlined by an elaborate frame, was enclosed by a large curtain between acts-a lil’ nuance that added to the unique ambiance. 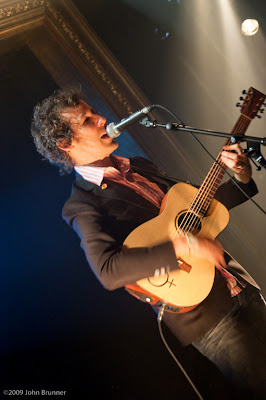 Opening the night, despite being third on the bill, was Ben Lee. In spite of this surprise, I managed to catch most of the set that heavily favored his recent release, The Rebirth of Venus. Accompanied by only his keyboardist, the Australian gave an intimate performance teetering on acoustic as opposed to the previous time I had seen him in Chicago years before. Though the new album has yet to capture my attention, the songs translate better live than recorded. What’s So Bad (About Feeling Good)? and particularly I’m a Woman Too were too polished, too poppy studio recorded, yet feels more organic and akin to his previous catalog during the night’s set. Catch My Disease, of course, made an appearance in the heavily French attended Golden Arrow, though the closeness stole the night. Ben held a short Q&A, answering a couple questions like “Where are you from?” and “Do you think you’ll do another album with a full band?” The answer to the latter is still up in the air. Ending the night, he brought out Surrender, a surefire crowd pleaser that encourages audience participation, calling out for the audience to repeat everything. He could’ve been in front of a warm bonfire that evening and it would have la même essence.

As much as Alexandre glided in after Ben, Sandra Nkaké juxtaposed the night with a mix of jazz and soul. Unlike the previous artists, she confirmed the night was more of a shuffle than a playlist. Singing in French, she sings poetically with a voice as powerful as the classic soul singers of the 70s. She began with just her voice and a drum machine, a shocking halt to the soothing music before. This dangerous, daring introduction literally made her voice seize the audience and hold them in place; a rarity in my years of attending concerts. Still, the near poetic introduction caused me to drift a bit until her backing band took the stage, cementing every attendee in place to Sandra’s soulful, strong voice. 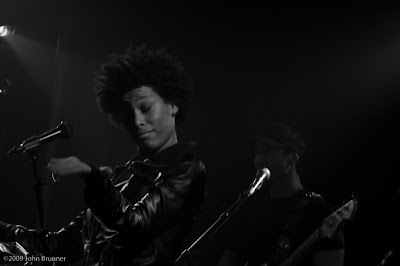 Despite nearly missing Ben Lee, this lil’ annoyance gave way to those surprising discoveries that would have slipped through fingers. Although you can check out Alexandre Kinn and Sandra Nkaké, it’s a true pity that la Flèche d’Or closed it’s doors. It’s a bit cliché, but those who haven’t been there really missed the train on it.