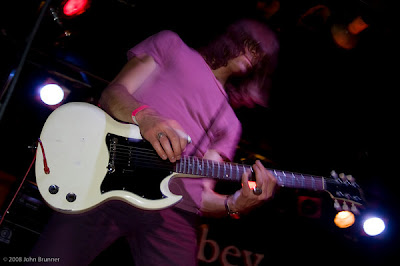 The Abbey Pub on Grace and Elston is a smaller venue that hosts acts on the verge. A few years ago, I caught Heiruspecs before they began to take off (expect their first new album in years shortly) as well as O’Death earlier this year. As a venue, it’s the bridge between the Empty Bottle-type bar venues and the Metro ‘venues with a balcony view’ halls. Jaguar Love stopped by Sunday night on one of their first Chicago tour dates since emerging out of The Blood Brothers‘ abrupt, unexpected split last year. Gone is the spastic melodies that threaten to burst into hardcore replaced with a newfound focus more akin to dance punk, or dancecore. In all honesty, it’s hard on the ears due to Johnny’s vocals-but that’s the fun in it. It’s as catchy as it is challenging.

I was first exposed to Polysics years ago when going over Asian Man Records‘ video comp. The electro-punk group comes at you with enough energy to power a small village purely due to guitarist Hiroyuki Hayashi alone. Dressed in jumpsuits, they’re one of the strangest, yet most energetic bands I have ever witnessed. Honestly, I haven’t seen any musician who can last as long as Hiroyuki can in getting the crowd into the show while running around the stage. It’s unbelievable. 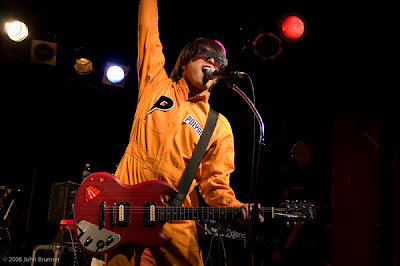 Written By
John
More from John
Should you have only been exposed to Noah and the Whale‘s single,...
Read More