Murder By Death takes a more narrative route towards their music. The spaghetti western influence has always been evident (a tribute to Ennio Morricone) with Adam Turla’s deep, darkened voice telling tales over campfire flames of Sarah Balliet’s cello and Dagan Thogerson’s nearby railway percussion-persistent and heavy as an iron horse. Finally a producer, Trina Shoemaker (Queens of the Stone Age, Sheryl Crow, Emmylou Harris), has cleared through the dust and weeds to create the most distinct sounding Murder By Death release yet in Red Of Tooth And Claw (Vagrant Records, 2008).

The sunrise of the album begins with Comin’ Home, an impassioned declaration by the main character of the album, laid over Adam’s throated vocals. The electric guitar is pushed back, allowing Sarah’s cello and Matt Armstrong’s bass to come through more clearly than ever. It doesn’t become prominent until Fuego!. The saunter between Dagan’s drumming and Sarah’s cello on Ball & Chain alludes to the creative capacity each has as a musician. 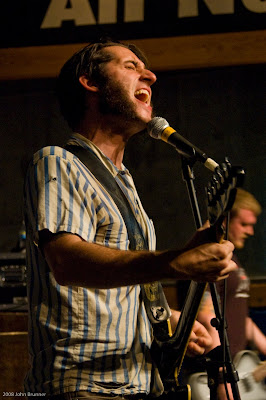 Lyrically Red of Tooth and Claw is both better than worse than previous efforts. Although not as cohesive as their masterpiece Who Will Survive, And What Will Be Left Of Them? (Eyeball Records, 2003), the story drifts away from the floorboards once and again. At the same time, Adam’s best lyrics can be found within. A Second Opinion features a stunning sting, “I’ll watch you crumble into the sand…if the right shows mercy I’ll use the left hand.”

Ash is the opus of this self-described epic, detailing a desperate dash from a fire back in Turla’s storied town. It removes the distractingly overproduced vocals on Comin’ Home for classic Turla. Dagan provides the aforementioned iron horse drumming during the second verse, punctuated by a lighter, yet damning cello notes. Turla strikes into the valuable vein of the western imagery with his chorus: “I turned to my brothers to look ’em in the eyes and there was ash…ash falling from the sky.”

While I didn’t expect the album to match the page-turning Who Will Survive…, I had hoped it would have matched In Bocca al Lupo (Tent Show Records, 2006). In many ways, it does. However, ’52 Ford doesn’t seem to fit the story being created. Spring Break 1899 remains a weaker finale, but is ambitious as a country ballad. (That been said, I love the retrospective clip at the end of the album. It’s as if you sit through a movie to get a teaser of a anticiapted sequel.)

If You Like:
…And You Will Know Us By The Trail Of Dead
Bright Eyes
Cursive
Explosions in the Sky
The Gaslight Anthem
Kiss Kiss
O’Death
Sleep Station
These Arms Are Snakes
The Snake The Cross The Crown
William Elliott Whitmore