Small, yet gearing up to start setting them off with their upcoming debut album, Four Star Alarm is one of the few Chicago punk bands that has risen through dozens of Chicago punk denizens to treat those who listened with a remarkable debut EP. The self-titled EP (Thick Records, 2006) is a little aged according to the release calender, yet retains its freshness while other post punk and pop punk acts spoil when exposed for too long. 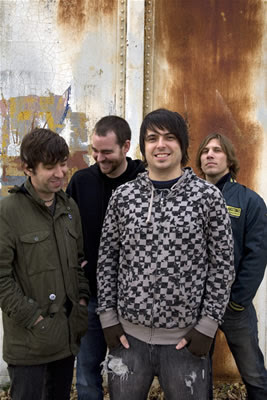 Chicago, since the late 1990s, has managed to perfect the post punk hook (Rise Against, Smoking Popes, Alkaline Trio, who’s Derek Grant recorded the band’s first demos) up to and, at times, past the point of being distractingly disproportionately polished. Thankfully, Four Star Alarm’s EP rests in the first group with their creativity in firm control. Featuring Eric Kane of Strike Anywhere and Greg Mytych of The Reputation, the EP kicks off in one swift motion. Waste Away pulls the breath in with a drum roll before releasing into a more complex rhythm than the second group. Theodore Moss hold complete control over his vocals, holding notes steady and smoothly as if time stopped. Although he’s not the crooner that is Josh Caterer, he shares a semblance when he strains his singing. It’s particularly evident on Implode, a guitar-driven post punk anthem that drops two-thirds in.

The EP itself is a bit guitar-heavy on the production, overwhelming Theodore with Jeff Dean’s guitar. Although Impenetrable shows what can occur when its equalized, at least for the first half before the issue returns. As much as the songs bring back late nights at the Metro or Bottom Lounge (the original), it also rekindles the hypnotic lag that can occur given a general lack of melodic variety. The harmonies lift the band above the average up-and-coming punk-influenced bands, but it needs a little more diversity in the rhythms and guitar-work. (Often an issue with post punk, for a contradictory example, see Able Baker Fox)

Nevertheless, their upcoming album is mixed by J. Robbins (Jets to Brazil/The Dismemberment Plan/Against Me!) and recorded by Andy Gerber (Smoking Popes/Local H) which, given the years between releases to refine their sound, could prove promising. Until then, we’ll have to stick with the punk produce that, although shiny and appealing to the eye, wastes away when you take it home.

Their debut EP is $3.99 via iTunes Plus. You can also stream three of the five tracks here.

If You Like:
Able Baker Fox
The Draft
The Gaslight Anthem
The Lawrence Arms
The Reputation
Rise Against
Smoke Or Fire
Smoking Popes
Strike Anywhere
Treaty of Paris