Strange symmetry. An awkward correspondence. Although you wouldn’t label the music awkward in the common sense, but as unconventional or perhaps hesitant in the deconstruction and construction of melodies unsure of what could be. The Seattle-based specter of The Blood Brothers‘ remains, Past Lives introduces themselves through a minimalist discordant electric guitar/naturalistic wood xylophone to lure the onlookers. By the end, they leave them softly stunned, distinctly disturbed yet entranced by the experience. Strange Symmetry (Suicide Squeeze Records, 2008) is the altered remnants of their previous band’s decade, an essence transformed and renewed. 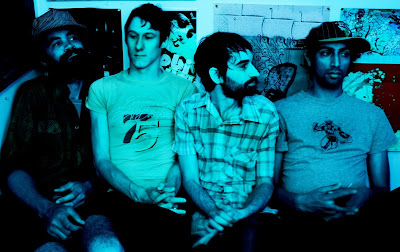 Reverse the Curse saunters and swaggers over Jordan’s taunting vocals. Psychedelic keys accompany, a definitive stretch from its synthed brethren, which swirls over downturned, down-tempo guitars. Jordan’s previous signature screams are relatively absent, save a solo appearance on Reverse…, deliberately restrained from the EP, but nevertheless shattering through.

The entire EP drifts a deliberate course; a balancing act that wavers between contributing positively to and negatively effecting the album. It’s an exploration through the now spectral imprint of a prior decade of effort. If that island burned, Strange Symmetry is the forensics picking apart the charred remains to move on musically. Chrome Life is the ideal example with waning distortion ceding to confidence towards the finale. “All right, it’s all right. It’s just life. It’s just life.”

Currently the EP is only available digitally here for $5; 192kbps DRM-free MP3s including album cover and credits. The CD/vinyl will be available via Suicide Squeeze on November 4th.

Previous: Now & Then: Past Lives and The Blood Brothers

If You Like:
Bear vs. Shark
The Fall Of Troy
Glassjaw
Jaguar Love
mewithoutYou
Neon Blonde
Since By Man
These Arms Are Snakes
Thrice

Written By
John
More from John
Katie of Sky Larkin Needless to say, I’ve been waiting to see...
Read More