The Faint‘s self-constructed, self-produced, and self-designed Fasciinatiion (blank.wav, 2008) is that long-desired Tetris piece that fits snug between Blank Wave Arcade (Saddle Creek, 1999) and Danse Macabre (Saddle Creek, 2001). The Omaha five-piece returns after a four-year album drought with an album more cohesive than the last, Wet From Birth (Saddle Creek, 2004). 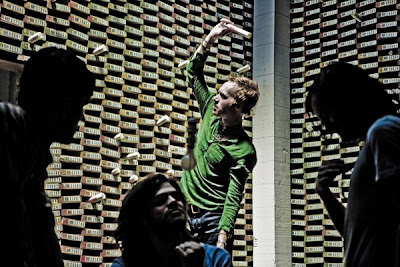 Get Seduced opens with digital pops, seeking and honing in on Joel Petersen’s landing bass building up into a diatribe denouncing the celebrity altered reality presented through fickle magazines. Todd Fink questions this obsession while criticizing the consumers as well; “Sell us magazines about the stars, and watch us stare into the void. What not to wear to the awards…” Unlike similar Omaha acts, The Faint doesn’t focus their zoom lenses on celebrity culture, but widens the aperture to include society as a whole on Machine In The Ghost before expanding even further. Machine…‘s separated staccato synth beats seems influenced by Crystal Castles of all, evoking effects from video games to punctuate Fink’s examination of TV’s influence on modern thought. “We seem like skeletons with bone head beliefs…” due to relying on others, instead of ourselves, to question and to think.

After the brief, biographical Fulcrum and Lever Fasciinatiion delves deeper under the surface. Reality vs. perception dominates in various domains, either as examining emotions or pure potential. Psycho provides a catchy pop rock platform driven by Dapose’s electric guitar, which bleeds into the existence and reality-questioning Mirror Error. “Baby knows we all create the world from in our skulls, everything you think of is as real as you make it.” The existentialist theme continues with the strongest track on the album, Forever Growing Centipedes. Playing with the thoughts of potential itself (“I could step outside in any direction, everything I choose erases ghosts of potential…”), plucked electric pops are interspersed among railed and heavy punk guitars (akin to Drop Kick The Punks).

They don’t forget the politics. A Geiger counter starts A Battle Hymn For Children, questioning God but more specifically military. “Preacher, am I gonna make it? Am I going up? Am I forgiven for the humans I dropped?” The electro-popped song hearkens as if a mix between Bloc Party‘s constant beats and Tunde Adebimpe‘s ethereal haunts. The final verse happens to be the strongest.

Absent is a distinct song, the Southern Belles In London Sing in Wet From Birth. Without such standouts, Fasciinatiion‘s power lies within its lyrical observations more than its music. The tempo remains perpetual, which benefits the dance beats but could have been a bigger drawback had the album stepped past its 35-minute threshold. With complete creative control over every aspect, The Faint have rekindled the electro-rock buzz surrounding the five-piece from Omaha.

The Faint
iTunes Plus | MySpace | Official